Yoga > The Final Step For A Headstand

The headstand or the shirshasana is quite the epitome of a good yoga practice. It is not called the "King of Asanas" for nothing. The innumerable benefits aside, the ability to stand upside down looks very impressive too.

But I resisted doing the headstand for the longest. In fact, I went for my Teacher's Training Course (TTC) at the Sivananda Ashram in Neyyar Dam, Kerala, without ever attempting it. This was ironical because the headstand is the first asana after a few warm up rounds of surya namaskar in a Sivananda class. Even so, I was glad that there was no pressure on me by any of my teachers to perform this asana. The TTC is quite intense as it is. With a hectic, packed routine in an austere setting with classes back-to-back, it is rather demanding. Probably that is why the teachers allow the students to progress at their own level of comfort.

While I thoroughly enjoyed my morning and evening asana sessions, I thought I knew what was holding me back from the headstand. I have always been non-sporty. I felt that I lacked hand-eye co-ordination as well as the strength required for almost any sport. Yoga was something that I could do because I have been blessed with a flexible body. But I had heard that "you need a strong core to hold a steady headstand".  Knowing that the core was my weakest point, I was sure that it just wasn't my cup of tea. In fact, I even found the preparatory pose - the dolphin - extremely difficult. Anything that required strength seemed impossible for me to perform.

One day, at the end of the evening asana session, a fellow student who I had not spoken with in the 3 weeks that we had already been there, came up to me. "I have seen you during the asana class, you do all the asanas except the headstand," he said. I nodded vaguely, not wanting to discuss my weak points with someone who I didn't know. "Seeing how you perform your other asanas I'm sure you can do the headstand," he continued without any hesitation owing to my lack of interest in his observation. That was that. He went about his business thereafter and I got busy with mine.

On this day, though, I thought of just attempting the first step of getting into the headstand - my forehead on the floor, the hands clasped around my head, and my elbows right next to my knees. The foundation is very important for getting any asana right. As I rose my tail, I got into the inverted V with the forearms, forehead and the feet firmly on the floor. I felt a balance of lightness and strength through my body.

This gave me the confidence to move to the next step: walking my feet towards my torso, straightening my back in line with my neck and shoulders and rolling gently towards the top of my forehead. At this point, my heels had risen off the floor and I was on tip-toes.

Then came the challenging part: I had to raise my feet off the floor one at a time and fold my knees near my torso in a suspended child's pose. I was surprised when I could actually do it. I was balancing on my head already! All I had to do was raise my knees towards the ceiling, with my legs folded back and eventually unfold my legs to straighten them up.

Seeing me finally attempting the headstand, my teacher came up to me and supported me while I went up into the headstand gracefully and steadily. Although I did come down with a jerk, which is not advisable, I had at least done my first ever headstand.

So what was the final step for me getting into the shirshasana?

And this is my favourite example of the mind-body unity that yoga displays so beautifully. In many cases, physical inflexibility actually arises in the mind or mental strength manifests into physical strength. It is lessons and observations like these that make it possible to carry your yoga practice off the mat and into daily life.

Posted by shibani bawa at 05:08 No comments:

Since I keep mentioning practices to boost the lymphatic system, I am posting an article that I recently wrote for Better Homes and Gardens, December'14 issue. 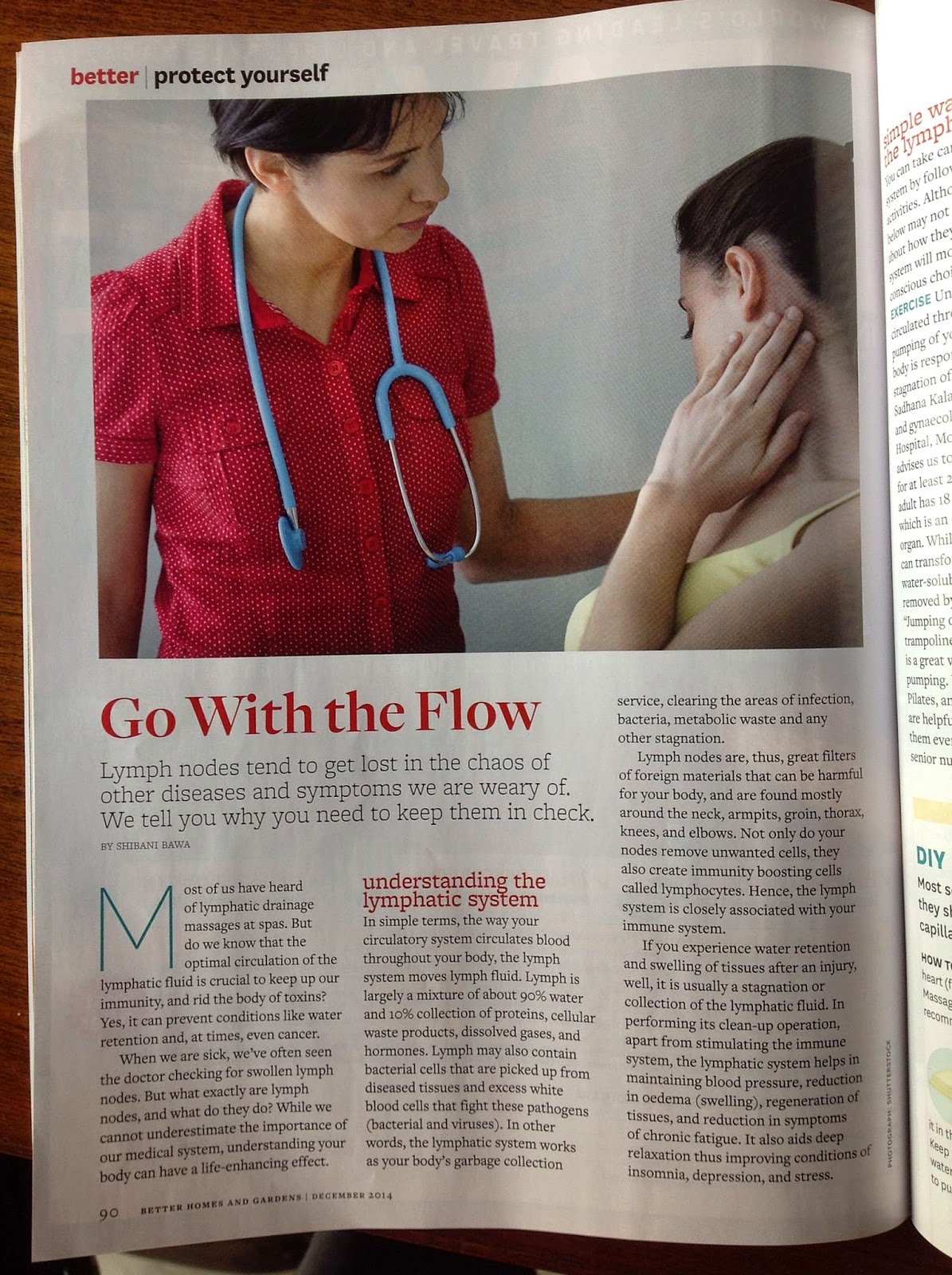 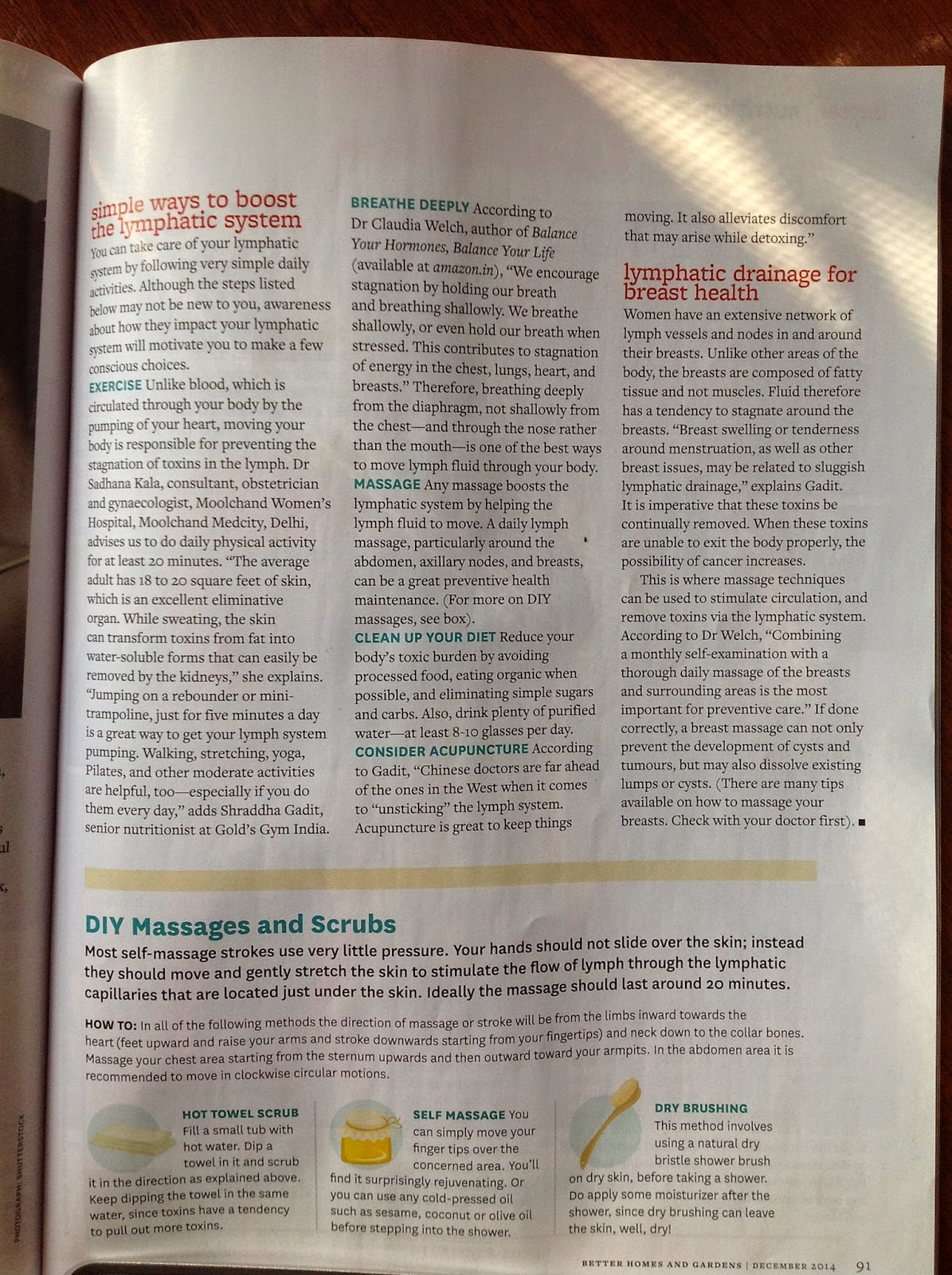 Posted by shibani bawa at 01:14 No comments:

Here is a story that I wrote for Better Homes and Gardens, Jan'15 issue on simple ways to get healthy this year. Do give it a read and incorporate at least some of these easy-to-follow practices in your daily routine. ﻿ 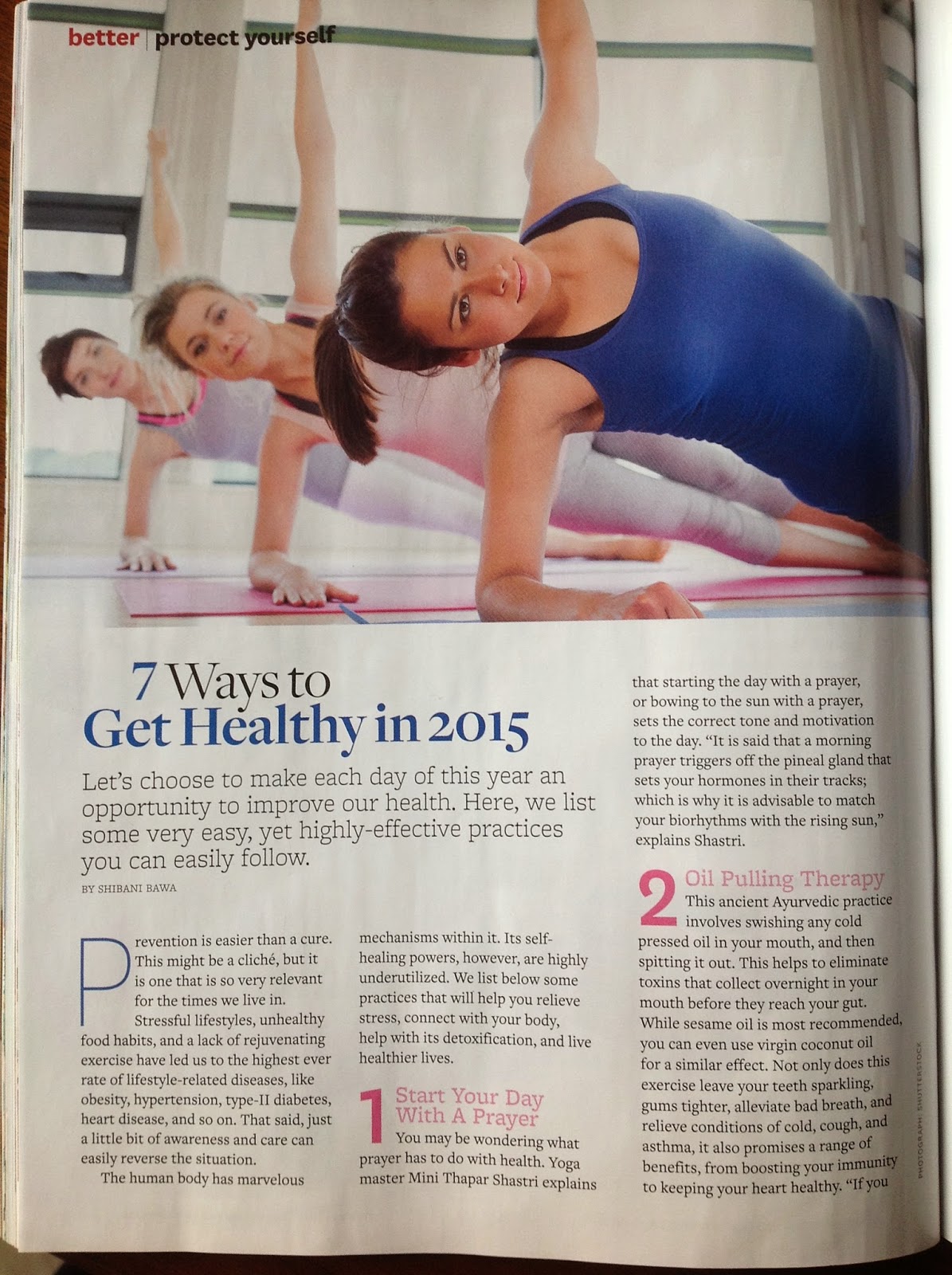 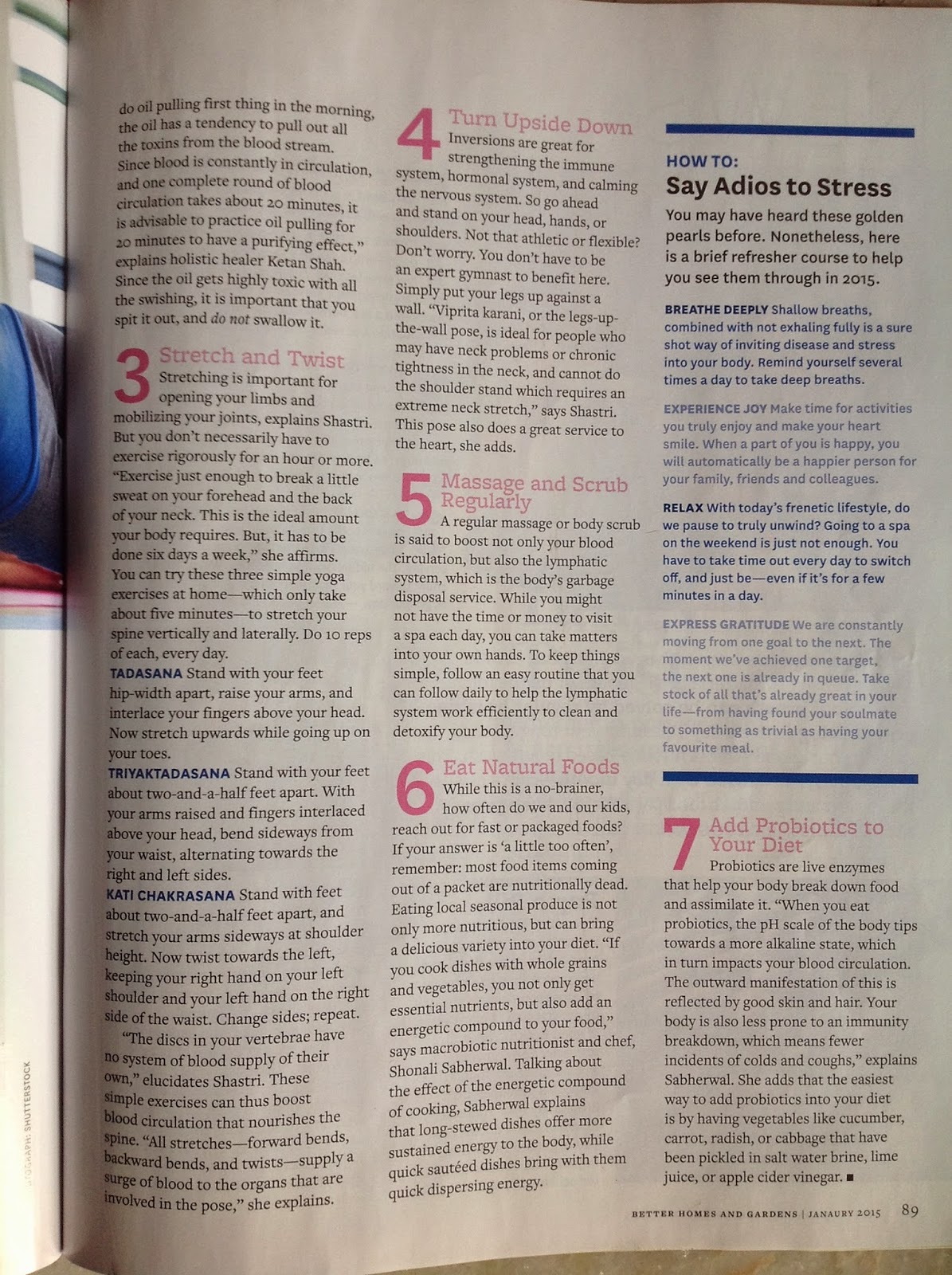 Posted by shibani bawa at 23:44 No comments:

Even though it may have an impatient tone, the underlying message is that of Self Motivation.

Aged 8 and 6 years, my kids may still be too young to understand the concept of self motivation. They are all too eager to impress their parents, cousins or friends by all that they do. While approval and appreciation play a very important role in raising confident children, I know that this is the time to lay the foundation of this all-important value. In fact, you may even start using self motivation at an earlier stage.

Instead of pushing them constantly to eat healthy, do their best in academics or extra curricular activities, I find that telling them that they are doing it for themselves has a much deeper impact.

And as they grow, competition amongst peers and external pressures to perform at a certain level will only increase. But self motivation is the one thing that will ensure that they are always giving their best, without succumbing to stress of any kind.

This is one value that I cherish the most in myself. Believing that I am trying to be the best that I can be, at a personal as well as professional level, makes me enjoy all that I do. It also takes away the need to prove myself to anybody.

While I don't have a competitive streak in me, self motivation ensures that I don't become complacent. I am sure that everyone, without exception, has a combination of certain talents and qualities that makes them unique as well as special. We need to nurture and develop these qualities to be the best version of ourselves.

And if there's just one thing that I'd like to teach my kids, it is this - always strive to better yourself! Then whatever activity or lifestyle they undertake, I'm sure will be met with success.

Here's wishing you all a very Happy New Year 2015. I hope you have set personal and professional targets for yourself to be the best that You can be!
Posted by shibani bawa at 23:43 No comments: 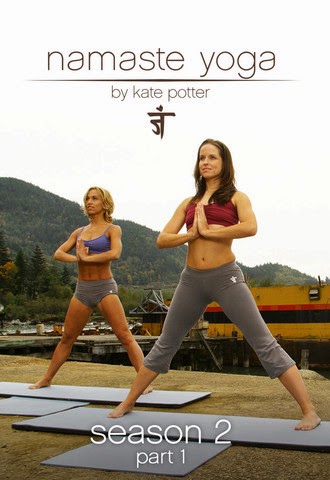 Kate Potter's Namaste Yoga series is an absolute favourite of mine!

Since I have a home practice, I am always looking out for ways to add variety to my yoga sequences to make it fun and more effective by way of working different muscle groups. And Namaste Yoga is my go to practice for just these reasons.

A few highlights of the Namaste Yoga series:
So if you're looking for a good video to complement your home practice, I would highly recommend Namaste Yoga. In my experience, I feel that the sequences are balanced so well that even if they are strenuous, they leave you relaxed. They have certainly been designed by a master who is deeply rooted in tradition and understands the philosophy of yoga yet presents them with a contemporary appeal.
Posted by shibani bawa at 05:36 No comments:

Eat good food, live life to the fullest and keep getting back to Yoga for optimising your physical and mental wellbeing.
If I can inspire even one person to experience the magic of yoga and healthy living practices, and adopt a positive attitude, the purpose of this blog is fulfilled.